UPDATING DAILY – PLEASE CONTACT US: IF YOU’D LIKE TO SHARE VITAL INFO ABOUT AN EVENT!
And Be Sure To Check Our “STAY” here and Campgrounds On This Site To Find Your Nest!

Be sure and check out listings Campgrounds, Hotels and Cabins on our site clik STAY

Rally Headquarters open daily 9am to 5pm. Located on the Boardwalk of lakeside Ave.

LACONIA — Back-to-back weekend events in Weirs Beach will usher in what businesses hope will be a return to the usual hustle and bustle of the city’s tourism mecca.

Bands will perform from the deck of a flatbed trailer on the closed-off portion of Lakeside Avenue. In addition there will be other bands and deejays providing entertainment

Gunstock Hill Climb June 15 2022
A 99-year Motorcycle Week tradition, the Gunstock Hillclimb will be held on Wednesday, June 15th at its original location, the 70-meter Torger Tokle Memorial Ski Jump! Join us for this popular, adrenaline-packed event and watch amateur riders scale the hill. There will be 3 stunt shows performed by the crazies from Eastcoastin’ Crew. Don’t miss this highlight of Bike Week!

“Ride to the Sky” Guided tour to Mt. Washington Auto Road base.  Led by WinniHOG #2529 Chapter.  Leaves from Laconia Harley-Davidson, register at 7am and leaves at 9am.

Be sure to start your day by checking into Rally Headquarters, registration  Open daily at 9am on the Boardwalk of Lakeside Avenue, next to the Pier. The Official Motorcycle Week Kick-Off Event, the Annual Peter Markis Memorial Ride, will depart from the Naswa Resort at 11am. This is a New Hampshire State Police escorted ride around beautiful Lake Winnipesaukee that will return to the Naswa at 4pm for an afternoon of food and entertainment.

Laconia Bike week, “Wild and Crazy” are words typically used to describe the lakes regions Bike Week may be a little harsh these days. But what began over ninety years ago as NH Motorcycle Weekend, really has a very unique and colorful history. Traveling back to the earlier years, the races were held at Belknap Recreation Area in Gilford.

Although the races are held outside the Lakes Region, Weirs Beach, Laconia NH, has always been the place to be for this event.

In the old days, motorcycle clubs would dress in matching costumes and parade their bikes all around the Lakes Region in a fun and colorful spectacle. As the years went on, the costumes took on a different flair and display unique wilder fashion. But the excitement of seeing and hearing these beautiful bikes has been the epic event for the Father’s Day week of June in the Lakes Region for many years and counting.  Witness Hand-painted design on your bike as highly skilled hands create your own choice in painted design. Walk the many booths with an array of purchases from Parts to clothing! This is an event geared for the entire family for summer events right here on Lake Winnipesaukee.  Get To Laconia Bike Week! 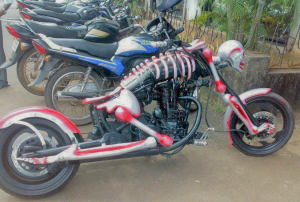 The highly traveled Route 106 has for many years been the bridge between the races and the rallies. Years ago, camping was permitted on both sides of Route 106 leading to the raceway. Motorcycle gatherings upon the roadsides with campfires, smoke shows, and bikers permeated the area. Parties raged through all hours of the day and night as they take over bike week begins.

Throughout the 1920s and 1930s, the Gypsy Tour continued to visit Laconia nearly every year, with a handful of motorcycle enthusiasts and small-scale promoters organizing races, shows, and other events. In 1938, Fritzie Baer was instrumental in establishing road racing at the recently developed Belknap Recreation Area (now Gunstock). Mr. Baer remained involved in the races over the next three decades, and the rally, now generally referred to as Laconia Motorcycle Weekend, grew in popularity, attracting more and more riders from all over the United States.

In 1960, the A.M.A. ceased its sanction of the Gypsy Tour, but motorcyclists continued to visit Laconia in ever-increasing numbers. Gradually, the rally became a weeklong event, with many bikers arriving earlier in the week. Local businesses dependent upon tourism became ardent supporters of the rally, as it brought increased mid-week business during the early part of the relatively short tourist season.

The Hill Climb Event at Belknap Recreation Area was discontinued in 1962, and the road race moved to Bryar Motorsport Park (now New Hampshire International Speedway) in Loudon in 1964 and was later for a time renamed the Loudon Classic. Motorcyclists began camping in large numbers along the side of the road on Route 106 in the vicinity of the track, and as far north as Belmont. Still, Lakeside Avenue at the Weirs remained the primary gathering place and the rally was generally known as Laconia Motorcycle Week.

During the 1960s, a decade of social unrest and rising mass media influence, clashes between police and bikers occurred at motorcycle rallies around the nation, and Laconia was no exception. The so-called “Riot of ‘65” brought national media attention, and a resulting bad reputation, to the Laconia Rally. Confrontations between motorcyclists and the police became commonplace, and the City increasingly came to see Motorcycle Weekend primarily as a law enforcement problem. For several years after the civil unrest of 1965, the number of mid-week events decreased, and the rally consisted of a three-day weekend. In 1975 all camping along State Route 106 was banned and the number of visiting motorcyclists dramatically decreased for a time.

During the 1980s, the numbers of motorcyclists attending Laconia Motorcycle Weekend increased slowly, as tensions gradually eased between bikers and the police. In 1990, local business owners contacted the A.M.A. with an eye toward returning the rally to a week in length as it had been prior to 1965. The following year, local business owners and the Lakeside Sharks motorcycle club formed the Laconia Motorcycle Week Association (later renamed the Laconia Motorcycle Rally & Race Association, now again known by its original name). The Association assumed responsibility for scheduling and coordinating events, publishes a periodical magazine and actively promotes Laconia Bike Week nationwide. In 1992, Laconia once again became an A.M.A. sanctioned event on the revived Gypsy Tour, and in 1993, the Hill Climbs returned to Gunstock (formerly known as the Belknap Recreation Area).

The City of Laconia enacted a comprehensive licensing ordinance in 1999 (Chapter 161) to regulate itinerant vendors and special events, devoting a subsection to Motorcycle Week. In 2000, the council generally amended the licensing ordinance and defined Motorcycle Week as a nine-day period ending at midnight on Father’s Day. (Chap. 161-11-A). Applicants must submit written forms and fees, and their application is reviewed by the Motorcycle Week Technical Review Committee. Property owners who wish to rent sites to vendors or otherwise engage in the commercial activity must submit a site plan for review. The City Council further regulates the event by the issuance of special parking and traffic orders and appropriates the necessary funds for City departments that have Motorcycle Week-related expenses.

Laconia Motorcycle Week currently runs from the second Friday in June through Father’s Day. Most activity, and the greatest crowds, usually occur during the last four days. Estimates vary, but the number of visitors to the State during that period each year is usually set at between 100,000 and 400,000.

There are many places to find Lodging on Lake Winnipesaukee, But they fill up fast for Laconia Bike Week.  Here are a few to sample, and inquire.

Most of the action is at and near The Weirs Beach and these will especially be gone quick.